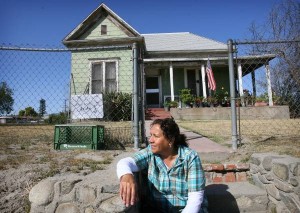 “Everyday life is a little harder because we’re breathing in all this pollution. We used to be able to open our windows and doors on a hot summer night, but can’t do it anymore because all we smell is diesel from the trucks and trains.”

We have less than THREE DAYS to join Terry Flores-Lopez in the fight to transform California’s toxic hotspots – California legislature must pass all bills by THURSDAY Sept 12th!

Click here to send an email to our Senators telling them to support AB 1330, the Environmental Justice Act!

Terry Flores-Lopez has lived in Westside San Bernardino all of her life. Through the years, industrial facilities moved into Terry’s neighborhood, or vastly expanded their operations. About 10 years ago, Burlington Northern Santa Fe (BNSF) Rail yard expanded its operations to a rail intermodal facility, where cargo containers are loaded and trains are built and maintained. This has increased activity at the facility, as well as the numbers of diesel spewing trucks hauling large containers through her neighborhood. 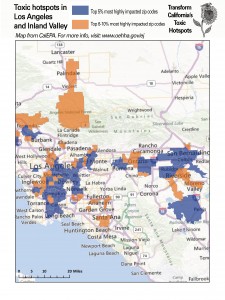 The Westside of San Bernardino is one of California’s “toxic hotspots:” it is in the top 10% of most highly impacted zip codes. These top 10% of California zip codes have a deadly mix of high pollution levels and socioeconomic vulnerabilities, such as high poverty levels. Throughout California, 7.8 million people live in similar “toxic hotspots,” and almost two-thirds of them are Latinos, and almost one-half are African Americans. The map to the right shows where are toxic hotspots in the LA and Riverside/San Bernardino area.

“We used to have family gatherings at my home, but no one wanted to come over anymore. They say: Do you really want to expose us to all this As trains are built across the street, you can hear the loud bang from each car connecting to the other. The noise is so loud, it scares my little ones. They’ll look up at me scared and with wide eyes.” Read more about pollution in Riverside/San Bernardino here, or check out CEJA member Center for Community Action and Environmental Justice.

AB 1330 requires the California Environmental Protection Agency to use identify toxic hotspots throughout California. This will enable us to target resources and programs into these overburdened areas to transform them into thriving communities.

Check out the AB 1330 Fact Sheet, or click here to read more about the bill!.