Protect communities along the 710 Corridor

SB 811 (Lara) State Highway Route 710 is heading to the Governor’s desk for his signature. The 710 Corridor is one of the biggest freight corridors in our region. Plans to expand must include the community voice! Tell Governor Brown to pass SB 811! 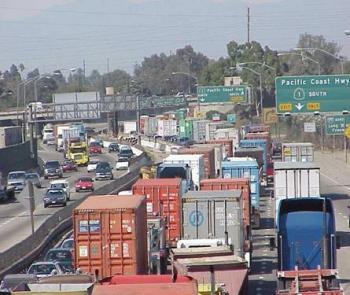 The 710 freeway stretches 23 miles from the City of Long Beach, near the Ports of Los Angeles and Long Beach, to Alhambra, a city in the San Gabriel Valley. Plans have been in the works for over a decade to expand the numbers of lanes on the 710 in order to ease freight transport to and from the Ports, which receive 43% of all the imports to the United States. (With the expected increase of imports from Asia and the expansion of the Panama Canal in 2014, the Ports’ import capacity is expected to increase.)

This is a global issue with local impacts.

Freeway expansion means more diesel trucks and other traffic—
and the attendant noise, pollution and elevated health risks–in communities along the 710 corridor. Official proposals have also included removing homes to accommodate the expansion.

Today, the 710 carries an estimated 47,000 truck trips each day. Research indicates that each big-rig truck releases as much air pollution as 150 cars, so that’s a lot of exposure to particulate matter, nox, and other criteria pollutants. Adding multiple lanes in each direction will add even more dangerous pollutants to our air.

There is an undeniable link between low birth weight & premature births and a close proximity to busy roadways, such as the 710. Aside from homes throughout the length of the freeway, there are also more than 30 schools located less than 1 mile from the freeway.

The community’s priorities are: Reduce pollution along the corridor, and prioritize clean alternatives to the increasing diesel-based freight transport in the region. It is important to make sure local voices are heard in a truly democratic process, and ensure that planners take health impacts into account to protect against increased truck traffic. Read more about our work to advance demands for health, clean air, and improved quality of life along the I-710 corridor, click here.

The community is working to accommodate projected port growth while reducing air pollution. Known as Community Alternative 7 (among other proposed alternative plans) includes: