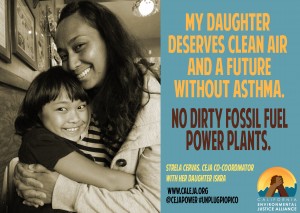 I am the parent of a lovable (and very opinionated) 9-year-old named Iskra. Like any other parent, my #1 concern is my kid’s health and well-being. Did she eat her lunch? Is she watching too much TV? Is she making friends?

But how often do parents stop and wonder about how clean the air is for their kids? I grew up in Los Angeles and like thousands of other kids, I had asthma as a young child.  Little did I know that LA would one day be ranked the #1 city with the dirtiest air.

I often fear that my little girl will also get plagued with asthma or some other illness because of LA’s poor air quality. I have to be thankful that she doesn’t have asthma, but there are warning signs: one doctors said she has weak lung capacity, and Iskra has chronic eczema, which is linked to weak lungs.

Pio Pico Dirty Power Plant: Bad for the health of our families, bad for our pocketbooks, and bad for our climate

Because I care about Iskra’s health, I am concerned about California’s push to build more dirty power plants. One example is the Pio Pico Power Plant that San Diego Gas & Electric (SDG&E) is proposing to build in San Diego. Pio Pico would get built less than 1.5 miles away from the border. This is a region that already has some of the dirtiest air in the state and replicates the old pattern of dumping our dirty pollution near Mexico. If built, Pio Pico would emit over half a million tons of greenhouse gases a year. This year, we saw the disastrous impacts of large wildfires like the Rim Fire in Yosemite that will come with climate change. I don’t want to leave that legacy for my daughter, either.

What’s so frustrating about this dirty power plant is that my organization and our partners across the state already killed this proposal once! Together with community leaders, in 2012 we pushed the Public Utilities Commission (PUC) to reject SDG&E’s effort to build the Pio Pico plant. They called SDG&E’s bluff: California doesn’t need the power that Pio Pico would provide. But SDG&E is too worried about their profits to stick with the democratic decision made by government regulators. This proposal is about increasing their bottom line, not serving Californians.

Pio Pico comes with a price tag of $1.6 billion. If built, taxpayers in Southern California will be paying for dirty energy for years to come – Pio Pico comes with a 25 year contract. So when Iskra is 34, she would be stuck breathing emissions from this fossil fuel dinosaur rather than seeing solar panels blanket California. Our future generations would literally be paying: with their health, and from their pockets.

Every time we build a new dirty power plant, we take a step backwards. We move away from the renewable energy that power our communities, puts Californians to work, cleans up our air and prevents climate change.

Let’s Say No to Pio Pico, Yes to Clean Energy, & Yes to Our Children’s Health!

The truly scary part is that Pio Pico is just one example. Corporate polluters like SDG&E are lining up proposals to build more dirty power plants across California.

In early 2014, the California Public Utilities Commission (CPUC) will decide on whether to approve Pio Pico for the second time. Knowing the damage that a single dirty power plant can have on our air quality and on the health of our children, I can’t help but take action. Like all parents, I would do everything in my power to ensure Iskra’s health and safety.

Click here to join me in telling the CPUC and corporate polluters “No to Pio Pico!”, “Yes to Clean Energy” & “Yes to Children’s Health!”