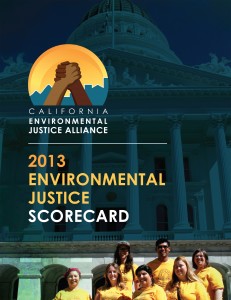 “It is time environmental policy tackles the issues our communities struggle with on a daily basis, from asthma epidemics to local polluters that violate environmental laws over and over. This shift is already happening because of the growing power of communities of color, and our new Environmental Justice Scorecard will be an important tool to help us build even more awareness about our issues in statewide policy.”

People of color are California’s new majority, and polling data has shown over and over that people of color care about the environment and want to see strong government action to address climate change, among other things. People of color are also a growing force in the voting booth, helping swing critical elections and pass ballot measures such as Proposition 30 in 2012.

What does the 2013 Environmental Justice Scorecard find?

CEJA looked at 10 bills that moved through the legislature in 2013.

CEJA will continue our work to advance environmental justice in statewide policy. In the coming year, we will be: