Did you know your electricity rates may go up soon? The California Public Utilities Commission (CPUC) is considering changes to electricity rates as a result of a new bill passed in 2013. This law, AB 327 (Perea), makes a number of changes to the way rates are structured and allows the CPUC to approve a new fixed charge on all customers. Big utilities want to force everyone to pay the maximum flat fee which would especially hurt customers who use little or no electricity. This fixed charge could harm low-income Californians, and will increase the monthly bills of those who try to save money by using less electricity.

How does electricity pricing work again?

Currently, California’s electricity is priced to incentivize conservation: the more energy you use, the higher price you pay. There are four different pricing “tiers,” where people who use less energy pay lower rates, and those who use more energy pay higher rates. Most low-income people save money from the lower tiers because we typically conserve energy. But all that can change if the big utilities have their way. 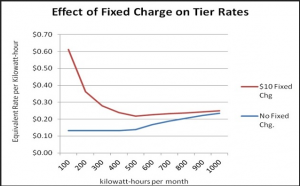 Graph courtesy of the Sierra Club

The CPUC is implementing the guidelines created by AB 327. The big three utilities – Pacific Gas &Electric, Southern California Edison, and San Diego Gas & Electric – are pushing for customers to pay the maximum fixed charge: $10 per month (or $120 per year), while low-income customers would be forced to pay $5 per month (or $60 per year).

The graph above shows what happens when all the charges on the bill are combined: those who use the least electricity are really paying the very high total; while the more you use, the lower the price you pay. High energy users will get rewarded by paying lower rates, while low-income communities will pay more on their energy bills no matter how much energy they conserve. So the changes in rates have the following bad effects:

This doesn’t help California move in the direction we want to go! 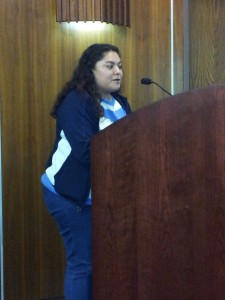 This is where CEJA and our allies at the Environmental Law and Justice Clinic at Golden Gate University come in. Not only are we fighting the fixed charge, we are trying to take advantage of some of the GOOD language in AB 327. The bill also requires utilities to include a clean energy program that benefits “customers in disadvantaged communities.” We need the CPUC to accurately identify the places that count as “disadvantaged communities,” so that the agency and the utilities implement a program that actually reaches the people who need this the most. We are pushing for the CPUC to use the new CalEnviroScreen tool, developed by CalEPA, that we have worked hard on to identify communities who should benefit. We are also pushing for public workshops to discuss the potential programs for low-income communities.

Why should we let big utilities change rates to have a negative impact on clean energy and on low-income Californians? We don’t have to.

We are fighting the fixed charge, opposing “flattened tiers,” and working to ensure that our communities see the beneficial programs they need! Stay tuned for information on ways to join the fight.