Diversifying the Air Resources Board 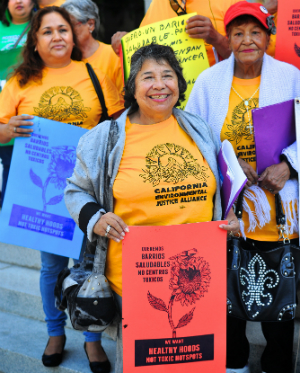 During the 2015 legislative session, a controversial bill that would have extended cap and trade was changed to become a measure that will make one of the most powerful regulatory boards in California, the Air Resources Board (ARB), more reflective of our state’s diverse population.

AB 1288 (Atkins and Pavley) would give the Speaker of the Assembly and the Senate Rules Committee two new appointments on the ARB for people who work directly with low-income communities and communities of color. This will be a huge step towards making sure the concerns of environmental justice communities are directly represented in some of the highest levels of decision-making on climate and air quality issues.

The actions of the ARB impact the environment, health and well-being of all Californians, but have a particularly important significance for low-income communities and communities of color, as these communities are disproportionately exposed to polluted air. The ARB is the lead agency to implement the California Clean Air Act and works with local air districts to develop plans and strategies to achieve share and federal air quality standards.

California residents look very different than they did 30 years ago when ARB was created. We are now a majority people of color state and in California people of color have some of the highest rates of air pollution-related exposure and illnesses are more likely to live nearest GHG emitting facilities with high emissions of particulate matter. We can no longer ignore this disproportionate burden of illness and pollution exposure.

During the Senate Environmental Quality Committee Hearing on September 11th, AB 1288 co-author Senator Pavley said, “It is important to have people who experience those impacts on a daily level in their communities so they can have a consistent voice at the table. We’re missing that, constant reminders of what these policies mean in real terms, in real life in impacted communities. It’s in the interest of all California’s that we have that broader representation.” Senate President pro Tempore Kevin De León also testified, “It is a paradigm shift…this board has had a dearth of diversity.”

These two representatives will continue ARB’s legacy of being a national leader in implementing cutting edge environmental programs and enhance the agency’s ability to meet the critical air quality, climate change and public health issues that the majority of Californians now face.

AB 1288 will ensure that the ARB performs more equitably and responds more effectively to issues in communities overburdened by pollution and we look forward to seeing the Governor sign the bill into law.