The end of the legislative session is always full of twists and turns, and this year was no exception. What did make this year exceptional was the amount of environmental justice legislation that made it through the process. CEJA and our members were thrilled to see several of our priority bills signed by Governor Brown!

See the chart below for the status of all of the EJ bills.

Join us at our victory party in Oakland on October 15th!

Read our press release on our statewide EJ victories here. 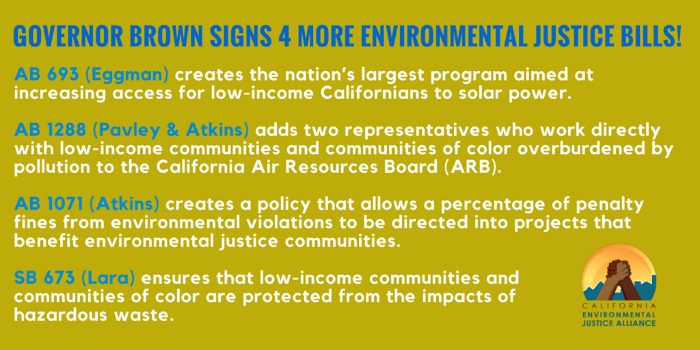 Will the Real EJ Champions Please Stand Up?

On October 7th, Governor Brown signed SB 350, authored by Senate pro Tem De León and Senator Leno, a historic bill that increases California’s Renewable Portfolio Standard to 50 percent by 2030 and doubles energy efficiency in buildings. The signing was the culmination of battle over climate policy that spanned the 2015 legislation session, where the impacts of climate and energy policy on low-income communities and communities of color took center stage during the 2015 session. SB 350 and SB 32, Senator Pavley’s bill to create new greenhouse gas reduction goals in 2050, were the focus of the debate.

In it’s original form, SB 350 also included a provision to reduce petroleum use by 50 percent Unfortunately, Big Oil launched a particularly vicious attack against this section of the bill, and many Moderate Democrats towed the industry line. As a result, the oil reduction piece was removed from the bill. Also under push back from Moderate Democrats, SB 32 was turned into a two-year bill.

Let’s be clear: even without the oil reduction piece, SB 350 is a huge accomplishment. A 50 percent Renewable Portfolio Standard is the most ambitious in the country and includes a prioritization to build renewable energy and create jobs in environmental justice communities.

It is unacceptable for Moderate Democrats, many of whom represent predominately people of color that are most impacted by climate and dirty energy, to use equity as a wedge to strip one of the most important provisions of the bill.  We must distinguish the legislators who are serious about addressing environmental justice issues, and those who are just hiding behind talking points.

SB 32 and SB 350 demonstrated a growing recognition that for big climate and energy policies to move forward, they must include the issues that communities of color care about and must bring direct benefits into districts most impacted. That’s why at the end of session we saw Senator Pavley adding in amendments to SB 32 that would benefit environmental justice communities.

We look forward to working with Senate pro Tem De León, Senator Pavley, and other real EJ champions in 2016!

From the many negotiations around both SB 32 and SB 350, a big win for environmental justice communities emerged. Under leadership from Speaker Atkins and Senator Pavley, a controversial bill that would have extended cap and trade was changed to become a measure that will make one of the most powerful regulatory boards in California, the Air Resources Board, more reflective of the state’s diverse population. Signed into law on October 8th AB 1288 (Atkins and Pavley) gives the Speaker of the Assembly and the Senate Rules Committee two new appointments on the ARB for people who work directly with low-income communities and communities of color. This will be a huge step towards making sure the concerns of environmental justice communities are directly represented in some of the highest levels of decision-making on climate and air quality issues.

Under the Radar: Largest Investment in Low-income Solar in the State

Amidst the high level debate about big picture energy policy stirred up by SB 350, one truly ground-breaking bill snuck through the process. We are thrilled to report that on October 8th, California created the nation’s largest program aimed at increasing solar access for low-income residents by signing into law AB 693 (Eggman). The new Multifamily Affordable Housing Solar Roofs Program will install solar directly on multifamily affordable homes and get tenants the economic benefits of the energy savings. The bill would create dedicated funding of $100 million per year for ten years – a total of $1 billion – to install 300 megawatts of solar. It would be the first program to direct the utility savings back to renters, reducing energy bills for 210,000 low-income apartments. It would reduce greenhouse gas emissions by up to 3 million tons. This new program would be an exciting effort to bridge the “green divide,” and ensure low-income communities and communities of color are seeing the economic and environmental potential of solar. We applaud Assemblymember Eggman for her leadership in authoring this groundbreaking bill.

Increasing Investments in Our Communities

The communities where CEJA members work are on the frontlines of poverty and pollution, but are also full of solutions. But our community visions need resources. Under the leadership of Speaker Atkins and Assemblymember Eduardo Garcia, we worked to pass AB 1071, which creates a policy that allows a percent of environmental penalty fines to be directed back into projects that benefit the impacted community. This version of a “community benefits fund” from environmental violations helps ensure that polluters pay for the health and quality of life impacts when they break environmental laws. AB 1071 was also signed into law.

We also worked to expand funding for one of the few state grant programs that funds community-based organizations working on environmental justice issues, the California Environmental Protection Agency’s Environmental Justice Small Grant Program. While AB 1062, authored by Assemblymember Bonta, was turned into a two-year bill, we look forward to seeing it through the process in 2016.

One of our partners, Leadership Counsel for Justice and Accountability, also helped secure $500,000 in technical assistance to help lower income and disadvantaged communities access funding within the state’s affordable housing and greenhouse gas reduction program, and secured a set aside for rural communities in the program. These efforts will ensure that rural communities are not left out of land-use planning and affordable housing funding in the future.

The regulatory agency in charge of managing hazardous waste in California, the Department of Toxic Substances Control (DTSC), is broken and failing to protect community health and the environment. With 80 percent of people living near hazardous waste facilities are people of color, these systems failures are undoubtedly environmental justice issues.

Thanks to a truly community-based effort led by members such as Center for Community Action and Environmental Justice, Center on Race, Poverty & the Environment, and The People’s Senate, bills such as SB 673 (Lara), which puts in place stronger permitting criteria for hazardous waste, and AB 1075 (Alejo), which increases enforcement actions on facilities that violate multiples times, there will be some long-overdue changes at DTSC. Both bills were signed into law, and they coincide with the addition of a new Assistant Director for Environmental Justice, as well as a new independent oversight panel that is being assembled for the agency. Let’s hope these new changes, along with the new Director confirmed earlier this year, start moving the agency in the direction of protecting public health over company profits.

Look out for our 2015 Environmental Justice Scorecard early next year featuring the 2015 EJ champions!