On Monday, January 11th, the California Public Utilities Commission issued a proposed decision that, at this time, would refuse to approve the contract between Southern California Edison and NRG for a new gas-fired power plant in Oxnard. The decision was welcomed by Oxnard residents and environmental justice advocates who have fought the proposal of yet another  power plant in this community.

The decision affirms the environmental justice issues at stake with the proposed power plant. Oxnard, where NRG would locate the plant, is a low-income community, already overburdened by existing power plants and pollution sources. The decision holds that utilities must consider environmental justice, both when contracting for renewable resources that bring benefits to a community, and when contracting for gas-fired power plants that impose pollution burdens. The decision observes that it is not clear the utility made that consideration. 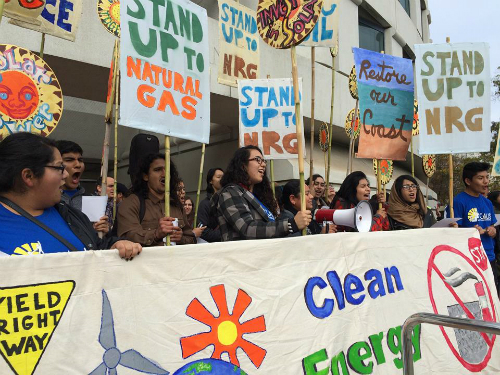 Central Coast Alliance United for a Sustainable Economy rally in front of the California Public Utilities Commission in San Francisco on December 17th.

“We’re one step closer to a clean Oxnard and getting rid of the pollution we’ve been burdened with for years. The voices of our community calling for clean, renewable energy are being heard.”

“Hundreds of residents have spoken out against Oxnard being burdened with yet another dirty power plant. This is a sign that the CPUC is listening.”

“The Commission is recognizing that utilities have a legal duty to consider environmental justice, and moving in the right direction to ensure that happens. The next step will be to require SCE to carry out the meaningful analysis, before it awards any contracts.”

The CPUC will keep open the proceeding, allowing SCE to return if the California Energy Commission approves the NRG plant. At that point, the CPUC would have more information to evaluate whether the plant would be safe, in light of climate change and sea level rise.