Community Voices at Highest Levels of Decision Making on Climate

Recently, members from Asian Pacific Environmental Network and other community-based organizations gathered in Paris at the U.N. climate conference to demand strong international agreements that protect and benefit the people most vulnerable to the impacts of climate change.

If California is to continue its global climate leadership, we need no less here at home.

Richmond, home to many low-income Asian Pacific American immigrants and refugees and the Richmond Chevron refinery, is a prime example of why we need decision-makers from environmental justice communities. 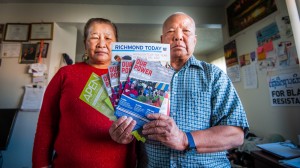 Richmond residents have shown up at city meetings for decades, asking Chevron to clean up its act so their families can breathe easier.

Low-income communities and communities of color in Richmond and across the state have long endured the root causes of climate change, pollution and pollution-related illnesses, such as asthma and cancer.

Now, after decades of fighting for clean air and fewer trips to the emergency room, front-line communities across the state will finally have a champion at the decision-making table.

After years of organizing and advocacy, environmental justice advocates won new legislation that ensures community voices are heard on the California Air Resources Board, which regulates our state’s climate and air policies.

With the leadership of Assembly Speaker Toni Atkins and Sen. Fran Pavley, AB 1288 was signed into law. The bill adds two new seats to the ARB for representatives who work directly with communities vulnerable to air pollution.

We’ll finally have representatives who are directly connected to the challenges in our neighborhoods and who will be accountable to our communities.

It is time for the ARB to reflect California’s diverse population. The California Environmental Protection Agency has found that 89 percent of the people living in our state’s most polluted areas are people of color.

The Air Resources Board has an Environmental Justice Advisory Committee that has offered guidance to the ARB, but the ARB has rarely followed its recommendations.

For example, almost a year ago the EJAC called for a study on whether greenhouse gas emissions in overburdened neighborhoods are rising or falling, but the ARB never completed that study.

Meanwhile, some data show that greenhouse gas emissions from industrial sources, like the Chevron refinery in Richmond, have actually increased since the passage of AB 32.

In 2016, the California Environmental Protection Agency will revisit the AB 32 Scoping Plan, which outlines the strategies our state will use to reduce greenhouse gas emissions.

This is a critical time to have members on the ARB who will work with front-line communities to resolve the challenges we face every day. These two new seats will help our communities take the lead to ensure that polluters play by the rules and that we have better rules altogether.

Environmental justice communities have been at the front lines of the crisis, and we are on the forefront of the solutions — we are taking our place at the highest levels of decision-making on climate.

Miya Yoshitani is Executive Director of the Asian Pacific Environmental Network, based in Oakland, and in the 1980s was one of the authors of the original Principles of Environmental Justice that served as the blueprint for local and cross-border movements in the United States and the world.