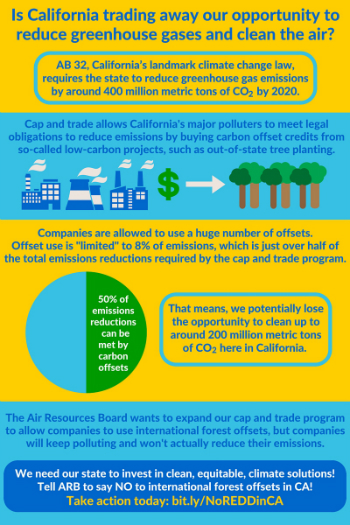 What are carbon offsets?

Carbon offsets (“offsets”) are projects that are supposed to lower greenhouse gas emissions: one offset “credit” is the same as one ton of CO2 removed or avoided from our air. Through AB 32 and California’s Cap-and-Trade program, companies can trade pollution permits (“allowances”) and/or buy a certain number of offsets in order to achieve the state’s goal to reduce its emissions to 1990 levels by 2020.

In reality, offsets are a huge loophole that give big corporations a cheaper way to pollute without making real emissions reductions on site – or at all. Offsets are also dangerous because they do nothing to reduce our burning of fossil fuels that cause irreversible damage to our biosphere.

REDD (Reducing Emissions from Deforestation and Degradation) are international offset projects that claim to preserve forests in tropical countries. Despite widespread critique of offsets and REDD, California is poised to adopt REDD forestry offset credits into its Compliance Offset Program in 2016. 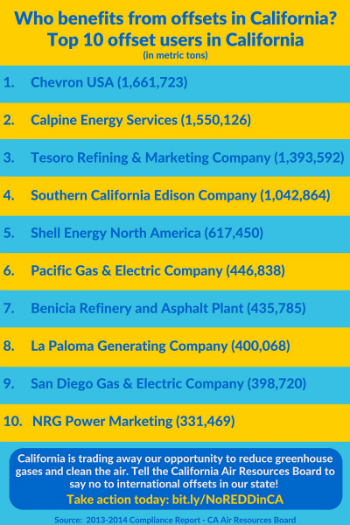 Of California’s 182 offset projects, 90% of offset projects are located outside of CA, allowing polluters to pay companies across the country to avoid emission reductions here at home.

Why do we need to keep REDD out of California?

Since California’s top offset buyers are the state’s most profitable oil companies and big utilities, those standing to gain the most from REDD are big corporations, carbon consultants (offset brokers), and speculators. Offsets also discourage California-based polluters from making greater emissions reductions on site, which threatens our state’s most vulnerable communities. While nearly half of all Californians live within six miles of a polluting facility, they are disproportionately people of color (62 percent compared to 38 percent of whites).

REDD gives governments, loggers, miners, lawyers, traders, brokers, and Wall Street an opportunity to control and profit off of Indigenous Peoples’ forests. Many Indigenous groups living in REDD territories face the threat of land grabs, institutional violence, evictions, and imprisonment for continuing their cultural practices on the land.

REDD does not equal less emissions: The idea behind all offset projects is that they must create actual reductions in emissions that wouldn’t have happened otherwise, but all these additional emissions reductions, are difficult – if not impossible – to prove.

REDD creates the perverse incentive of designating more forests for clearcutting: Governments are encouraged to cut down more trees now in order to claim that they are reducing deforestation later.

Protections for forests can be reversed: Even when a government pledges to “avoid deforestation” in an area for a certain number of years, it can later turn around and cut down that same forest after that period is over.

REDD doesn’t make scientific sense: When fossil fuels are extracted and then burned, it increases the net amount of carbon circulating in the biosphere. Trees are also part of the natural carbon cycle, unlike fossil fuels. So no amount of planting or saving trees can make up for all the CO2 that gets added to our climate when fossil fuels are burned.

The California Air Resources Board is considering allowing REDD programs into California’s already-flawed cap and trade program and CEJA is working hard to stop this!

Expanding California’s Offset Program to include REDD would threaten the overall health, rights, and livelihoods of marginalized Indigenous People all over the world, while neglecting the needs of environmental justice communities throughout California that suffer from high rates of pollution. We need real solutions for reducing emissions and preventing deforestation, not false solutions like REDD!

Tell the California Air Resources Board to listen to impacted communities and focus on reducing emissions here at home!

We demand the California Air Resources Board to: