The California legislature made climate history on Wednesday, passing two historic pieces of legislation: SB 32, by Senator Pavley, and AB 197 by Assembly Member Eduardo Garcia. Both these bills are now on the Governor’s desk, where they will likely be signed into law.

These bills help ensure that California climate policy protects and benefits environmental justice communities and puts the state on a path to ambitiously reduce emissions over the next decade.

SB 32 creates 2030 greenhouse gas emission reduction targets and AB 197 enacts accountability reforms at the California Air Resources Board. It also directs the regulatory agency to prioritize measures that will reduce greenhouse gas emissions in environmental justice communities, and provide greater transparency through the release of data on air quality.

How these bills got passed tells an even more important story: Environmental Justice groups and issues played a key role, and need to be at the center of climate policy moving forward.

Senator Pavley introduced SB 32 in 2015, but the bill faced a tough fight in the Assembly. Too many Assembly Members were frustrated with a lack of accountability at the California Air Resources Board. Many felt the issues faced by their constituencies — low-income communities and communities of color — were not being addressed in these big environmental bills, a view shared by many in the environmental justice community.

By early 2016, prospects for strong climate policy where dim. Governor Brown was in closed-door talks with Big Oil, trying to craft a compromise piece of legislation that would bend to industry in order to secure votes.

Recognizing the need for Assembly leadership on climate issues, Assembly Member Eduardo Garcia stepped forward. Working with Asian Pacific Environmental Network, California Environmental Justice Alliance, and other environmental justice groups, he introduced AB 197. The bill’s provisions take a step towards a core EJ policy goal: reducing emissions from major sources in communities of color, which also improves air quality. The bill also addresses many concerns from Assembly Members about the lack of oversight at the California Air Resources Board.

With the strong support and hard work of the Senate pro Tem de Leon and Speaker of the Assembly Rendon, Senator Pavley and Assembly Member Garcia pushed the two bills forward as a package. 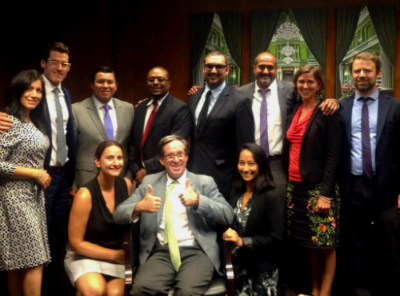 Environmental justice groups, labor and the environmental community collectively worked together to pass SB 32 and AB 197. In the face of fierce opposition from Big Oil, we sent a strong message that these bills are the best for our climate and for low-income communities and communities of color.

With leadership from the Senate pro Tem, Speaker Rendon, Senator Pavley and Assembly Member Garcia and the support of the broad advocacy coalition, two historic bills are now on the Governor’s desk, waiting for signature. California set yet another global standard in the fight against climate change and maintained our national leadership.

So what are key lessons learned from these victories?

1. Out in front: In order for California to pass the next generation of climate policies, the issues that environmental justice communities care about must be at the forefront. It is not enough to add on some equity language, or use the potential benefits in communities of color as a talking point. Our issues must be a significant feature of policy proposals.

2. In the center: The community-based organizations, which have spent decades working with residents most impacted by pollution and on the frontlines of climate change must identify the solutions we want to see and must be in the center of strategy development. We must be part of the decision-making process, not brought in at the end, but part of the strategy conversations from the first step.

With California a majority people of color state, and a diverse legislature with many members who want to see environmental policy benefit and protect their districts, the historic victories on Wednesday demonstrate the truth to what environmental and climate justice groups have been saying for several years: to be successful, and to win on climate, we must address the impacts on communities of color. Environmental justice needs to be front and center.