Making equitable land use a reality for Oakland with SB 1000

Improving land use is central to creating healthy neighborhoods. Land use planning shapes the future of our cities and remains a leading cause of environmental inequities. It’s important for residents to be meaningfully engaged in decision making about land use decisions in their neighborhoods. We can’t afford to continue to make land use decisions that harm our communities and our climate. If we can improve planning efforts, we can reduce disproportionate environmental and health impacts in our state’s toxic hotspots to move closer to Healthy Hoods.

CEJA was proud to co-sponsor SB 1000 by Senator Connie Leyva with our members at Center for Community Action and Environmental Justice. The new law will require cities and local government to consider an Environmental Justice Element in citywide General Plans. For the first time ever, environmental justice will now be incorporated into land use planning, which means local government will have a way to identify and meet the needs of the most vulnerable neighborhoods in and around their boundaries, which can help them access public funding. 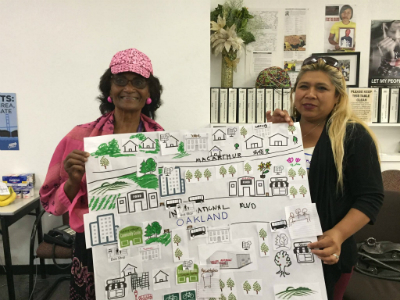 The City of Oakland is due for an update to its General Plan in 2017 and our members at Communities for a Better Environment are working to ensure that the city listens to the needs of long-time residents who have been asking for land use zoning.

East Oakland is a highly industrialized area. The 880 freeway traverses the heart of the neighborhood, carrying diesel trucks laden with goods from the Port of Oakland, which is the fifth busiest container port in the nation, that spew high amounts of toxic air contaminants daily. Other pollution-producing industrial facilities, such as the AB&I Foundry, sit right next to homes.

Jose Lopez, Staff Researcher at Communities for a Better Environment says, “We see the passage of SB 1000 as a tool to move forward equitable zoning updates and practices that will look more closely at the disadvantaged areas that have been left out of previous updates. We are looking at specific corridors in East Oakland that can benefit from changes to industrial zones. The city has said they don’t have capacity to look into zoning studies, but now they are required to consider environmental justice.”

Many of the challenges in East Oakland trace back to poor land-use planning, which is a leading cause of environmental inequities across California. Discriminatory land-use practices have put the overwhelming majority of polluting industries in the backyards of the most vulnerable communities, right next to our homes and schools. Consequently, low-income communities and communities of color suffer from exposure to toxic chemicals, leading to higher rates of asthma, birth defects and cancers.

“Ideally, we would like to create buffer zones between homes and schools located next to industrial facilities and auto body shops. This will help reduce impacts. Residents in the area also have a hard time accessing Coliseum BART Station and hope that the Metropolitan Transportation Commission will allocate more funding to make public transit more equitable and bring more improvements in infrastructure.” 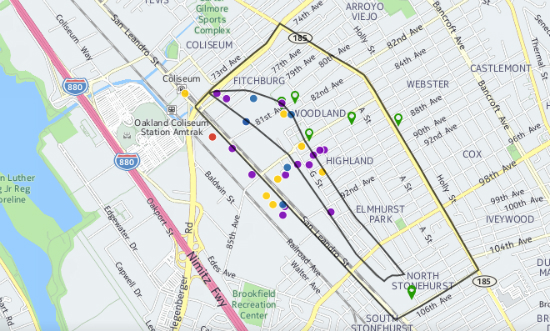 CBE sees tremendous potential to strengthen policies so when polluting industries violate new land use laws, they can be forced out. However, the question for Oakland is still how they can prohibit new polluting industries to come in and how to address the violations of the industries already there. For land use planning to truly be equitable, this must be done in a way that considers socioeconomics and ensures that policies direct benefits to local residents.

“A zoning study would allow us to have a more in-depth analysis of how residents in the community are impacted by the industrial area and how it can be transformed into a thriving Green Zone. We identified a heavily impacted area around 66th to105th Avenues and International Boulevard. The plan is to engage residents in participatory research and community visioning to help collect some of the technical data and vision needed to lay out a plan. This is long overdue for East Oakland and now possible with SB 1000.”