Another Oxnard power plant will move California towards climate chaos

No other city in all of California has more coastal power plants than Oxnard, with already three dirty power plants that provide energy for cities from Simi Valley to Goleta. For generations, the region has been powered by polluting power plants dumped on the working class and immigrant community in Oxnard again and again. It has become the region’s sacrifice zone, littered with dirty industry neighboring communities would never allow. In 2017, it is time for this historic injustice to end.

The California Environmental Justice Alliance stands with our partners at the Central Coast Alliance United for a Sustainable Economy (CAUSE) and allies in the region who have been fighting for two years against the proposal of another dirty natural gas power plant on Oxnard’s coast. We are proud of the CAUSE members and allies who said enough is enough and took part in last week’s civil disobedience action that shut down the California Energy Commission (CEC) hearing in Oxnard where they planned to publicly release their final staff assessment where they plan to approve NRG’s Puente power plant. 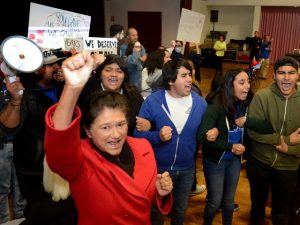 In the wake of Trump’s election, California leaders have talked a big game about the state’s commitment to clean energy and climate action. Yet, right on the heels of Governor Brown’s almost $2 billion budget proposal to fight climate change and continue the state’s climate leadership, the CEC attempted to quietly move forward with more dirty energy in Oxnard.

California has made big strides to advance environmental justice in 2016, passing AB 2616 which created a new law that requires dedicated representation on the California Coastal Commission for communities disproportionately impacted by pollution, and passing SB 350, requiring the CEC to study barriers that prevent low income consumers from accessing clean energy. However, the environmental justice implications of the Oxnard power plant have gotten only cursory review. Local renewable energy solutions in places like Oxnard can help accomplish the goals of both SB 350 and AB 2616.

Many neighborhoods in Oxnard have higher rates of asthma than over 90% of California and the CEC has failed to consider any clean energy alternatives to this project The CEC falsely claims that because Oxnard residents already breathe dirty air, continuing to put power plants there should not make it worse. However, the proposed power plant will be built in an environmentally sensitive area that has been mapped out as highly vulnerable to flooding with current sea level rise projections. This risk of flooding could create a disaster and put our power supply at risk. The plant will spew 600,000 tons of carbon dioxide every year and natural gas plants are known to emit large quantities of methane, which has over 20 times the global warming potential than carbon dioxide. The high levels of toxic air emissions leads directly to respiratory illnesses like asthma. 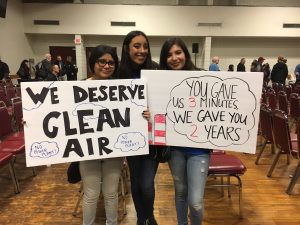 The California Coastal Commission has recommended against the power plant based on concerns about flooding due to sea level rise, but following intense industry lobbying, the California Public Utilities Commission voted in favor of the project last May. However, the final decision now rests with the California Energy Commission.

Governor Brown just appointed two new Commissioners to the CPUC, Martha Guzman Aceves and Clifford Rechtschaffen, who will hopefully help the agency demonstrate proactive engagement and support of programs that will directly benefit environmental justice communities. In 2017, Governor Brown will also be appointing the first-ever environmental justice seat to the Coastal Commission. This seat must be filled by an EJ champion who will represent the urgent needs of low-income communities of color.

While last week’s hearing was the first since the CEC issued its final staff recommendation to approve the project in December, the CEC is currently holding a series of community hearings before it is anticipated to approve the power plant in May.

The Oxnard coastline will not be used as an environmental dumping ground any longer. Oxnard’s low-income Latino and immigrant families have borne the burden of pollution for too long. It’s time for Oxnard to have the clean air and clean energy they deserve. I urge the California Energy Commission to stop making Oxnard the sacrifice zone.