The Burden of Pollution And Proof

While California is a climate leader, it’s still an uphill battle to ensure that environmental justice issues are addressed in state policy. But with a series of new reports released over the past several months, we’ve got mounting evidence that demonstrates the urgent need to address climate and air quality impacts in California’s low-income communities and communities of color.

Last Fall, leading academics released a groundbreaking report on the impacts of California’s cap and trade program on low-income communities and communities of color. Just last week, a new report released by the Office of Environmental Health and Hazard Assessment (OEHHA) shows, yet again, that many of the concerns raised by environmental justice (EJ) communities are valid: our largest climate polluters are located disproportionately in communities of color, and along with the greenhouse gases they emit comes a whole slew of toxic air contaminants that clog our lungs and impact our quality of life. 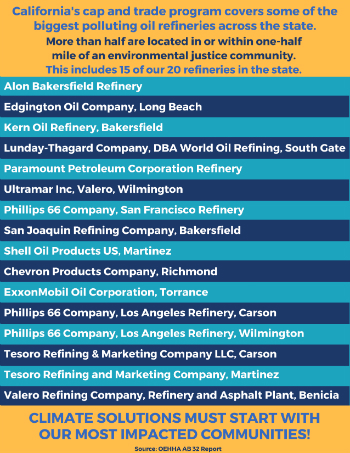 The new agency report looks at the the location of facilities covered under California’s cap and trade program, which regulates greenhouse gas (GHG) emissions from stationary sources, such as refineries, cement and power plants. The researchers analyzed their location, how many tons of GHG’s they are emitting, and what other types of air contaminants are being released from these same facilities.

The report found that — not surprisingly —  greenhouse gas facilities are disproportionately located in EJ communities. More than half (57%) are located in or within one-half mile of a disadvantaged community. This includes 15 out of the 20 refineries in the state.

The report also found that these facilities are not just releasing greenhouse gases; they are also releasing other toxic air pollutants. These include criteria air pollutants and air toxics (ozone, particulate matter, sulfur dioxide, nitrogen dioxide, carbon monoxide, and lead), all of which are known to have negative health impacts. This correlation was especially notable for refineries, hydrogen plants and cement plants. Finally, the report found that facilities that emit higher levels of GHGs tend to have higher emissions of air toxics and criteria air pollutants. 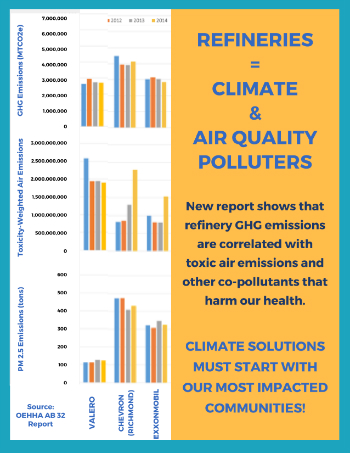 The extent of analysis was limited by the patchwork approach to data collection and reporting at our state and local regulatory agencies. Data collected by multiple entities, on varying timelines, submitted to different databases, and not all publicly available, undermines our ability to really understand what is happening with air quality and GHG emissions.

All this evidence supports another long-held conviction in the EJ community: the cap and trade system gives big polluters loopholes to avoid reducing their emissions, which perpetuates local air quality hotspots. And that leads to dirty air, worse health, and more GHG emissions here in California at a time when we have set ambitious and achievable goals to dramatically reduce GHGs.

As Martha Arguello, an Environmental Justice Advisory Committee member and Executive Director of Physicians for Social Responsibility — Los Angeles, said recently at a California Air Resources Board hearing: “We must take these early warning signs seriously, and not see them as threats to the program, but ways we can make the program work and keep its promise to not making things worse in environmental justice communities.”

If we are indeed to take these warning signs seriously, here’s just a few of the things we need to do in climate policy:

While the bad news may be that our current cap and trade system is failing environmental justice communities, the good news is that there are multiple policy venues where we can make changes. The legislature is currently exploring ways to meet our ambitious 2030 climate goals enacted through SB 32, including extending the cap and trade system; the equity issues outlined by the reports must be the starting place for those conversations, and we must see these early warning signs as a clear evidence that the status quo is not acceptable.

The California Air Resources Board also recently released their plan to meet 2030 GHG targets, called the “Draft Scoping Plan.” Unfortunately, the plan fails to meaningfully address many of the environmental justice concerns that have been documented by the recently released reports, and that have been raised repeatedly by the formal Environmental Justice Advisory Committee. CARB must update the plan to fully address the range of issues identified by the reports, the Committee and other environmental justice advocates over the past year.

California’s climate leadership is even more important now in the face of the Trump administration. The best way to maintain this leadership is to confront the core equity issues that our most vulnerable communities experience everyday. In fact, as communities of color, which are a critical constituency in California’s diverse state, have persuasively shown over the past several years: this may be the only way to truly win on climate.

Filed under: Featured by kay-ceja