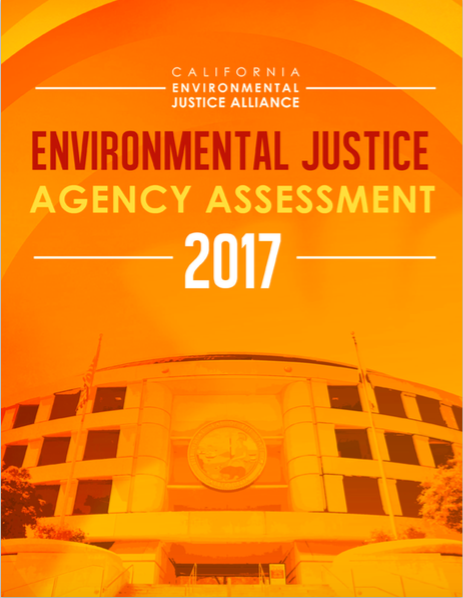 Over the past several years, the environmental justice movement has won a historic number of new policies at the statewide level in California, and now there is increased awareness and effort to address EJ issues at state agencies. Across the state, CEJA members and partners and other community groups are engaged in agency proceedings of every type, bringing the voice of residents who are most impacted by statewide regulations into the decision-making processes. This hard work has generated significant momentum to increase the understanding and responsibility of our regulatory agencies to achieve EJ.

CEJA is proud to release our 2017 Environmental Justice Agency Assessment that provides an overview of how well environmental justice issues are being integrated or championed at state agencies, and where there are areas for improvement. To our knowledge, this assessment is the only one in the nation to look at how well state agencies develop, implement, and monitor policies that address environmental issues that impact low-income communities and communities of color.

This year, we are thrilled to have partnered with four organizations — the statewide coalition Californians for Pesticide Reform (CPR), the Center for Biological Diversity (CBD), the Community Water Center (CWC), and The People’s Senate — to assess nine state agencies, as well as highlight key issues at another six.

Our 2017 EJ Agency Assessment reveals that many state agencies are not successfully integrating EJ into their decision-making. Overall, many state agencies still make decisions that actively harm EJ communities and fail to meaningfully prioritize their long-standing health and quality of life needs. 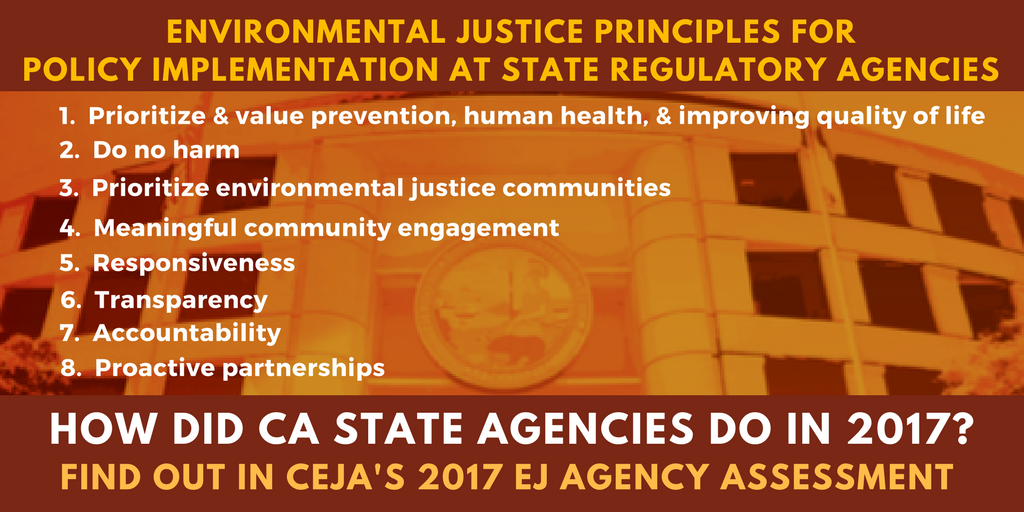 The following nine state agencies were seen by CEJA and our members and partners as critical implementers of — or roadblocks to — EJ policies and programs, especially in the last year. EJ advocates shine a light on key policies that these agencies were responsible for — from basic human rights like clean water and clean air, to innovations in renewable energy and sustainable development. 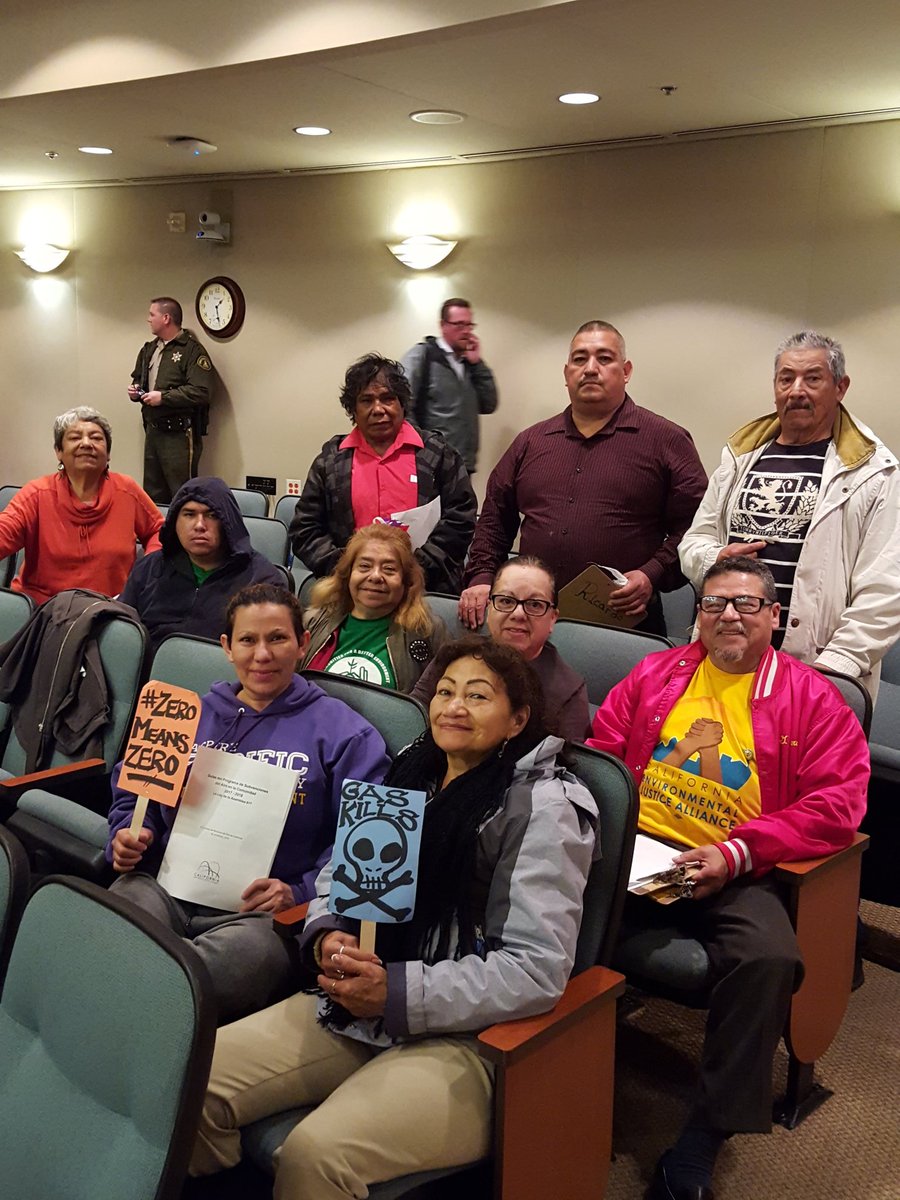 In order for any new statewide policies, including those diversifying decision-making at state agencies, to result in on-the-ground changes in communities most impacted by pollution, there must be aggressive, equitable implementation at California’s environmental, energy and transportation agencies.

Without strong leadership from our regulatory agencies, these groundbreaking policies will not lead to the meaningful reduction of pollutants, reduced climate change, increased environmental benefits, and improved environmental health for communities most harmed by pollution burdens. In addition, the many ongoing issues that communities have been working on for years will continue to go unaddressed. The actions of state regulatory agencies are also a reflection of the Governor’s priorities, as state agencies fall under his executive administration and leadership.

Environmental justice communities are starting to see EJ policies and programs emerge in these agencies. It is important to monitor the agencies to ensure they are aware of and follow our EJ principles. The assessments in this report are made in the spirit of charting a course to improving agency actions, with the ultimate goal of improving conditions that negatively impact our most vulnerable residents. This progress is needed not just for EJ communities, but ultimately to benefit all Californians.

“Today’s current California Transportation Commission is a roster of industry elite and developers who can too easily trivialize EJ concerns about our roadways, which bring black clouds of diesel and concrete to desecrate our communities. We need commissioners that move beyond the current silos of concrete and grade separation and will boldly push the Commission to work alongside the Public Utilities Commission and Air Resources Board to ensure that our infrastructure supports a zero emissions goods movement industry for California’s future.”
— Allen Hernandez, Executive Director, Center for Community Action and Environmental Justice

“The California Division of Oil, Gas, and Geothermal Resources (DOGGR) needs to accept its obligations to protect the public against adverse impacts of drilling and fracking instead of operating as an extension of the oil and gas industry. It is shameful that in California, which in many ways is at the forefront of the environmental movement, this agency has been allowed to operate with such disregard for the welfare of residents by the Governor and the Legislature. Frontline communities deserve and demand more.”
— Darryl Molina Sarmiento, Executive Director, Communities for a Better Environment

“Despite years of public and legislative scrutiny, the Department of Toxic Substances Control remains an agency in crisis. DTSC’s well-documented failures to protect the public from toxic harm have done little to change the department’s policies and practices that shroud the agency in secrecy and exclude the public from decision-making processes. Unless we change the structure of this broken agency, California families will continue to be poisoned by toxic chemicals where they live, work, and go to school.”
— Ingrid Brostrom, Assistant Director, Center on Race, Poverty & the Environment

“While there is still some work to do, Strategic Growth Council has by far led its peers in ensuring focused investments in and engagement from communities most in need. The Transformative Climate Communities program alone creates a strong foundation to require local jurisdictions to engage communities, better integrate funding opportunities and improve economic, health and environmental outcomes. The legislature has an opportunity to build on SGC’s work and fund the program appropriately.”
— Veronica Garibay, Co-Director, Leadership Counsel for Justice and Accountability

“In 2012, California became the first state to recognize the Human Right to Water. While the State Water Board and other water agencies now consider this right within their regulatory processes the fact still remains that over 1 million Californians lack access to safe, clean, and affordable drinking water. More has to be done by advocates, regulators, and the legislature if we truly want to ensure all Californians have access to the Human Right to Water.”
— Debi Ores, Attorney, Community Water Center

“The California Department of Pesticide Regulation is failing its mission to ‘protect human health and the environment.’ Rather than use its state influence to help lead California in a transition to safer and more just ways of growing food, DPR has overseen a sharp spike in pesticide use over the past two years, with carcinogenic and toxic air contaminant pesticide use levels nearing 20-year highs. DPR management repeatedly favors powerful corporate agricultural interests over public health, betraying those most at risk from industrial ag’s continued dependence on hazardous chemicals.”
— Sarah Aird, Co-Director, Californians for Pesticide Reform

“Though California’s oil is some of the dirtiest on the planet, Governor Brown’s oil regulators issue thousands of new drilling permits each year. This dirty oil extraction fuels climate change and endangers the millions of Californians who live, work or go to school next to toxic drilling operations. And because drilling occurs disproportionately in communities of color, California’s devastating oil problem is both a public health and environmental justice emergency.”
— Maya Golden-Krasner, Senior Attorney, Center for Biological Diversity

Filed under: Featured by kay-ceja