Thousands of Californians are facing life-threatening health problems due to failed regulations and years’ worth of delayed cleanup of toxic substances in their workplaces, homes, and schools. Some of the stories and culprits of toxic pollution are well known, including corporations like the battery-smelter Exide, the copper-recycler Phil-Bro Tech, and the U.S military. Many of the most persistent health problems, however, are caused by seemingly harmless offenders, like dry-cleaning businesses across the state.

The bottom line: no matter the cause of the chemical pollution, polluters should be regulated and made to pay for the cleanup of their toxic messes. 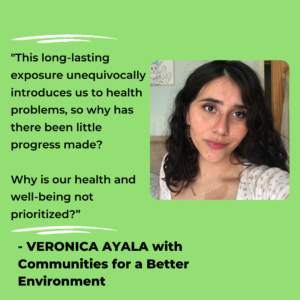 What is the Department of Toxic Substances Control?

The Department of Toxic Substances Control (DTSC) is the state department responsible for enforcing hazardous waste laws, protecting Californians and the environment from harmful effects of toxic chemicals by restoring and cleaning up contaminated sites, and compelling the development of safer products.

For years, DTSC has failed to protect residents. The department has a record of weak enforcement, slow and botched clean-up efforts, and back-room negotiations with polluters. And by DTSC’s own accounting, there are 200,000 suspected toxic sites across the state that continue to go unregulated due to lack of funding.

In 2021, Communities Demand Accountability from the DTSC

For Gloria Herrera, a resident of Delano County who organizes with the Center on Race Poverty and the Environment (CRPE), DTSC’s failures appear in the form of a plume of chemicals issuing up from below a set of dry-cleaners in her home of Delano. The combination of perchloroethylene and trichloroethylene that leakes up from these cleaners is a deadly combination, and common to dry-cleaning facilities across the state. A 2019 report by the DTSC found that 75% of dry-cleaners statewide have contaminated surrounding groundwater and soil with cancer-causing chemicals.

In Delano, home of the United Farmworkers, Gloria organizes with the Delano Guardians, a community organization founded to protect citizens’ equitable access to water and clean air. “The DTSC is failing us,” Gloria shared with CEJA: “They need to build a community advisory group in order to make the cleanups happen.”

Hundreds of miles to the south of Delano in the small city of Maywood, Veronica Ayala shared her reaction to one of the state’s most toxic meltdowns: “When news broke that Exide had released large amounts of lead in my community,” Veronica said, speaking with an organizer for Communities for a Better Environment (CBE), “I was not at all surprised. After all, environmental racism is a real threat to low income communities of color.” 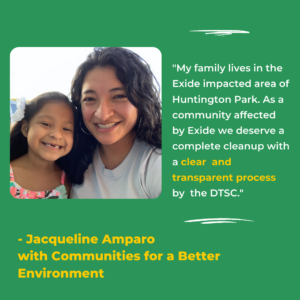 What shocked Veronica the most was the absence of any regulatory action: “I was surprised that the governmental organizations meant to protect us from these hazards disregarded our concerns and still, after many years, have not taken the steps to alleviate the wounds of Exide’s contamination.”

Jacqueline Amparo lives in Huntington Park. Speaking with a CBE organizer, Amparo shared that she and her family were never warned about the high levels of lead in her front yard when they moved in. “We were never told about the soil testing DTSC conducted on the property. After 2 years of attempting to obtain the results from DTSC, the realtors and the previous owner, we finally found out that our home tested to 247.9ppm of lead.” Although there is no safe level of lead exposure – lasting damage to the brain and nervous system occurs at levels as low as 5 micrograms – Jacqueline’s family’s yard tested at three times the allowable limit.

“Due to lack of funding, DTSC denied our home’s clean up,” Jacqueline continued. “As a community affected by Exide we deserve a complete cleanup with a clear and transparent process by DTSC.”

History of CEJA’s engagement with the DTSC

For over a decade, CEJA members Center on Race, Poverty and the Environment (CRPE) and Communities for a Better Environment (CBE) have fought for accountability from the DTSC.

This year, the state must create greater accountability and oversight over DTSC to protect frontline EJ communities who have been exposed to toxic pollution in and around their homes.

The department must center the voices of impacted communities to ensure that changes to DTSC lead to concrete improvements in its operations, more timely enforcement over polluters, and more effective site clean-up and remediation.

Now more than ever, we need to pressure decision makers to take action for an accountable DTSC. Join us for more action updates on Twitter and Instagram @cejapower, @CRPEEJ, @CBECAL or join our mailing list today.