Not One More Power Plant on Oxnard’s Coast

No other city in all of California has more coastal power plants than Oxnard, with already three dirty power plants that provide energy for cities from Simi Valley to Goleta.

CEJA stands with our partners at the Central Coast Alliance for a Sustainable Economy (CAUSE) and allies in the region who are fighting against the proposal of another dirty natural gas power plant on Oxnard’s coast.

Every time we build another polluting power plant, we take a step away from the growing potential of renewable energy that can power up California. California shouldn’t plug in dirty energy. It should power up our communities with clean renewable energy. 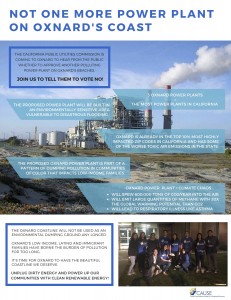 Alongside widespread community support, the Oxnard City Council passed a moratorium to stop more dirty energy power plants.  In response, NRG tried to threaten the city, saying they’d abandon their two old power plants and let them rust on Oxnard’s beaches, unless they’re allowed to operate another power plant for decades to come.

NRG is asking the California Public Utilities Commission to override the city’s opposition and approve the power plant anyway. We can’t trust this irresponsible company and Oxnard will not be responsible for the costs of clean up.

The proposed power plant will be built in an environmentally sensitive area that has been mapped out as highly vulnerable to flooding with current sea level rise projections. This risk of flooding could create a disaster and put our power supply at risk.

New power plants are part of a pattern of dumping the region’s pollution in coastal regions. Oxnard is already in the top 10% most highly impacted zip codes in California and has some of the worst toxic air emissions in the state. Like other communities of immigrants and low-income families, Oxnard has been a target for hazards like dirty power plants and toxic waste sites.

The plant will spew 600,000 tons of carbon dioxide every year. Natural gas plants are known to emit large quantities of methane, which has over 20 times the global warming potential than carbon dioxide. The high levels of toxic air emissions leads directly to respiratory illnesses like asthma.

The Oxnard coastline will not be used as an environmental dumping ground any longer. Oxnard’s low-income Latino and immigrant families have borne the burden of pollution for too long. It’s time for Oxnard to have the beautiful coastline they deserve.