Our detailed analysis on AB 398 is available here. CEJA is also deeply concerned about the apparent connection between AB 398 and Assembly Constitutional Amendment 1 (ACA 1). Late on Friday, July 14th, Assembly Republican Leader Mayes released ACA 1, which would require a ⅔ vote on cap and trade revenues starting 2024. Apparently an effort to entice Republican votes, it would go to the ballot in 2018. ACA 1 would pull California climate policy back to the divisive days of ⅔ budget negotiations, where a small set of legislators are empowered to extract significant policy concessions in exchange for their votes. It would also most likely result in funding a range of dubious projects and programs that have very unclear – if none at all – climate or air quality benefits. It would also delay critical climate investments. This is a short-sighted policy with long-term, negative impacts for California and environmental justice communities.

“AB 398 is a big step backward for California’s climate leadership and environmental justice communities. At a time when all eyes are on California, we can’t set a standard for other states and countries for a climate policy that includes hand outs to the fossil fuel industry. We are deeply concerned about the role Big Oil has played in drafting this legislation behind closed doors. AB 398 ties the hands of the California Air Resources Board and likely makes it impossible for this agency to accomplish our mandate, which is to reduce greenhouse gases to 40% below 1990 levels by 2030. As our largest sources of greenhouse gases in the state, limiting regulations on refineries will drive up prices on all cap and trade entities and increase pressure on other facilities and sources of pollution. It also weakens the legislative gains made by AB 197 by constraining the ability of the Air Resources Board to prioritize direct emission reductions. If California is to maintain our climate leadership, we need a program that helps us achieve our 2030 targets, not hinders that ability.

“Recognizing that the regulatory approach of the state was not working for our local communities, we worked directly with the Bay Area Air Quality Management District to produce some of the most groundbreaking rules to date around refinery emissions. With AB 398, those rules are now at risk. Residents living near the Chevron Refinery in Richmond are upset that their ability to make decisions about our air quality is now being preempted by the state. Overall this is a missed opportunity by California to lead the world in an equitable approach to address the immediate health impacts of local pollutants and advance an equitable approach to actually reduce the risk of climate catastrophe.”

“Our communities take climate change seriously and expect bold and courageous action from our policy makers, yet this bill represents a failure to keep that promise. AB 398 gives unacceptable concessions to the oil industry, and impedes our ability to clean our air, improve our economy and to protect Californians, by ensuring that the most vulnerable are protected. As a member of the Environmental Justice Advisory Committee, we’ve engaged hundreds of residents asking them what they wanted in a SB 32 Scoping Plan and this proposal reflects very little of what we heard from residents who deserve accountability and want to see AB 197 implemented. Making a deal for the sake of making a deal is not what climate leadership looks like. We hope that our representatives stand strong and reject this bad policy.”

Veronica Garibay, Co-Director of Leadership Counsel for Justice and Accountability

Over 50 groups, representing climate and environmental justice groups throughout the state, have announced opposition to AB 398. 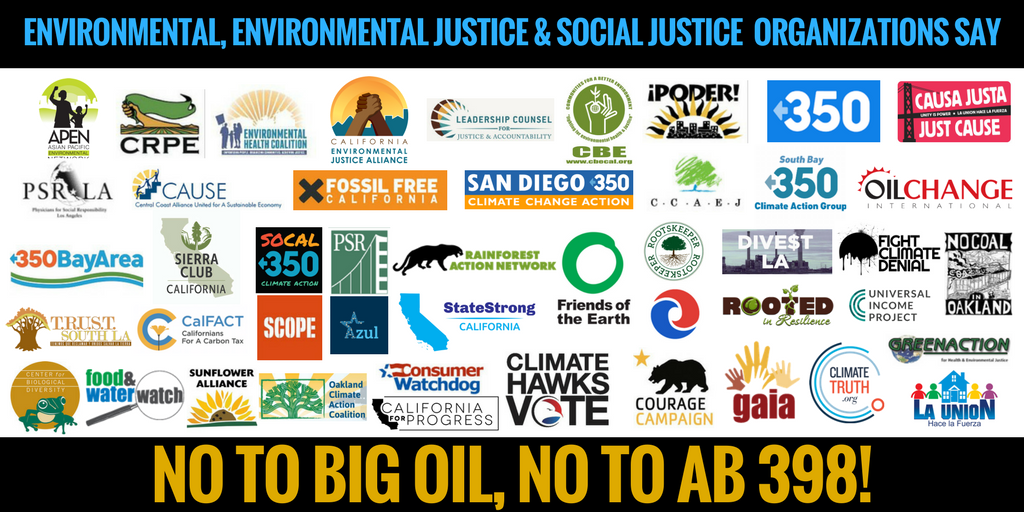 Filed under: Featured, News by amy-ceja