The first meeting of the 2022 Climate Change Scoping Plan community engagement process began with an admission of failure.

Other CARB Board members, including Board Member Hector De La Torre, acknowledged past mistakes but affirmed their good intentions for the 2021-2022 process: “I look forward to the opportunity to work together and hopefully this time we’re in better sync as we move forward,” De La Torre said.

But advocates sitting on the EJAC are doubtful, and for good reason.

“While we have seen progress in our ability to work with CARB staff and board members, more is needed,” said Martha Arguello, the Executive Director of Physicians for Social Responsibility – Los Angeles and three-time EJAC member.

A CEJA analysis of the 2017 Scoping Plan process found zero of the 198 recommendations made by the EJAC were adequately included in the final scoping plan—a rebuke to the 700 community members and twenty grassroots organizations who had collaborated for more than a year in the process.

In the four years since those last recommendations were sidelined, low income, Black, Indigenous, Latinx, Asian and Pacific Islander communities have borne the worst consequences of the seven largest wildfires in the state’s history, rolling blackouts during the three consecutive hottest months on record, and the highest numbers of deaths due to the current global respiratory pandemic.

In just the last few months, research from Stanford found that Black and Hispanic mothers in California are more likely to have premature births than white mothers because they are more likely to live within 3km of an oil well. Meanwhile, a leaked report by the International Panel on Climate Change warns the global climate crisis is accelerating faster than ever expected, with the worst impacts felt by low income and communities of color.

“We’ve got a lot of work to do, and it is time to listen to the Environmental Justice community,” Arguello added.

For residents living in California’s most polluted corridors, the stakes of the scoping plan process are often a question of life or death: the Scoping Plan could prioritize direct emissions reductions and provide a pathway to relief for millions of working families breathing California’s polluted air.

Or the 2022 Scoping Plan process, like the 2017 process before it, could leave communities of color, rural, immigrant, and impoverished communities out of the picture. The timeline is also critical: California’s “plan to plan” will structure the next 23 years of climate legislation and will not be updated again until 2027.

Frontline communities know that solutions to the climate crisis must start with environmental justice. 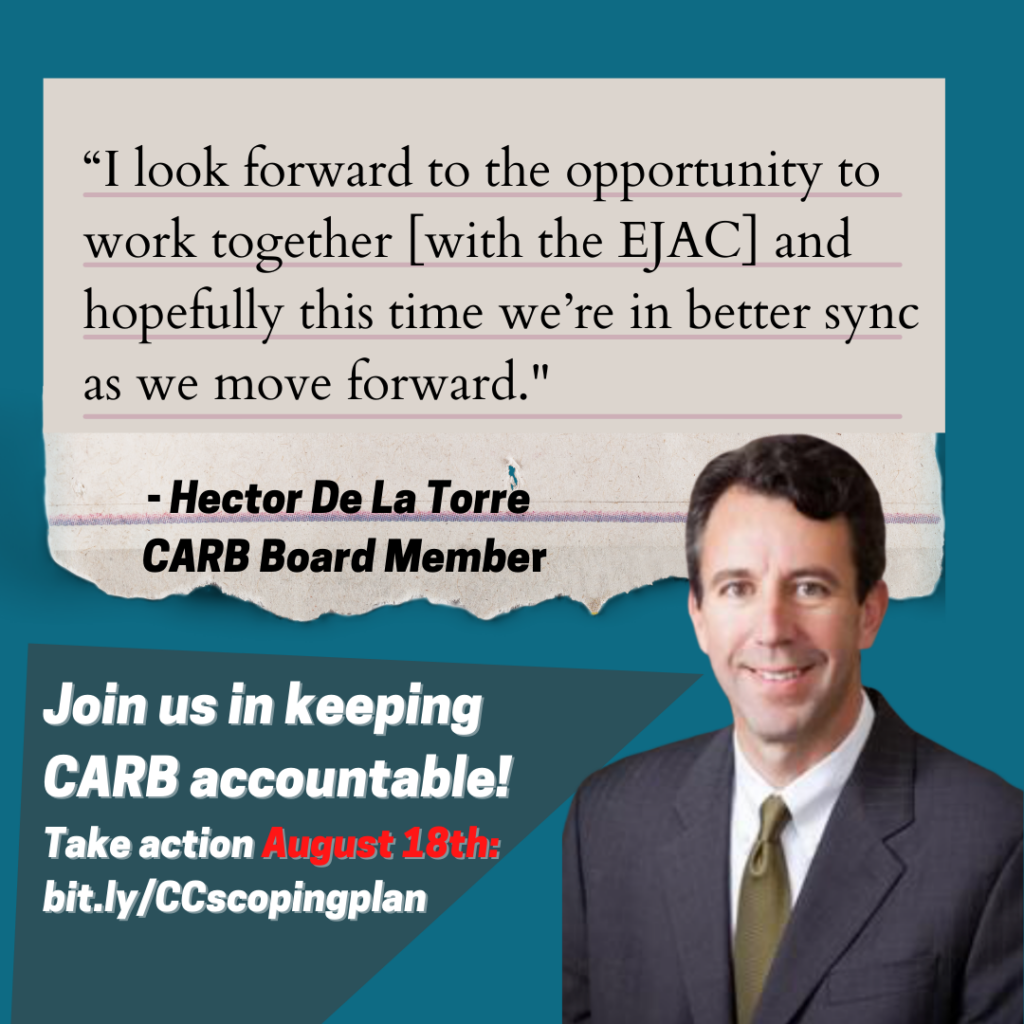 And as wildfires burn through carbon offsets and send thousands of climate credits into thin air, the case for direct emissions reductions becomes a matter not only of public health but of common sense.

“Dangerous drilling practices threaten our water supply, our food, our air, and our lives,” said Anabel Marquez, a resident of Shafter in a recent comment submitted to CARB.

The latest edition of the CalEnviroScreen, a tool that measures pollution exposure, shows Shafter residents suffer worse pollution than 90% of California.

“We can’t trade public health for short-term profit by drilling so close to where people live and learn,” she said.

Just 30 miles away in the majority Latinx and working-class community of Lamont, the Kern Oil refinery sits less than a mile from residential homes. Fires at the refinery have broken containment twice in the past three years.

“The oil industry and petroleum refineries burden Lamont residents with safety hazards and harmful pollution,” said Jose Mireles, a longtime resident, in the same comment to CARB. “At night you can see pollution clouds around the refinery,” he said. When EJAC members voice concern over whether the process will truly have an impact, these are the communities and residents they’re representing.

At the June 24th meeting, Chair Randolph emphasized that the 2021 process offered a new opportunity for collaboration. The gesture of good faith was backed up by a presentation from CARB staff who read aloud all 17 Principles of Environmental Justice. Taking a step further, staff said that under the new leadership of Chanell Fletcher, CARB “is focused on moving away from a top-down approach to one that centers building relationships, trusting community expertise, advancing community-driven solutions, and partnering with communities and residents to create a more just and sustainable future.”

“I want to make sure that we are talking not just about process, but about substance,” said Board Chair Liane Randolph.

“We will need to make sure there are opportunities for the concepts, views, and lived experience of the EJAC members to not just be noted in the document but to influence and advise the content.”

But while the comments from CARB’s Environmental Justice staff were appreciated, advocates were quick to note that the commitments would have meant much more coming from the Industrial Strategies Division of CARB, the body that oversees the Scoping Plan process.

Dillon Delvo, a new member of the EJAC and the Executive Director of Little Manila Rising in Stockton weighed in: “Can justice really come from something that is just advisory?”  he asked. At least six other EJAC members voiced similar concerns.

A seat at the table in these regulatory processes has been an important and hard-fought victory, but true justice is about both process and outcomes—presence in the room is a good start, but meaningful and substantive engagement is the necessary next step.

“I share a lot of hope but also a lot of concern,” said Thomas Helme, a new EJAC member and Co-founder of Valley Improvement Projects.“We know all too well what advisory means,” he said.

Now, CEJA and coalition members are working to ensure this Scoping process is more than an exercise in bureaucratic box-checking and urging CARB to enact the overdue recommendations of the 2017 process, including:

You can join CEJA and members at upcoming workshops, where advocates will work to ensure that the pathways for greenhouse gas reduction do not sacrifice community health and wellbeing.

Take action with us:

August 3rd, 2pm – 6pm: CARB will present the process to determine the contents of the scoping plan, or ‘scenarios’ to the Environmental Justice Advisory Committee in a meeting open to the public. This will be the first opportunity for members of the public to specifically weigh in on the contents of the Scoping Plan.

August 17th, 9:30am – 1pm: CARB will host another public workshop detailing the process to determine the scenarios to be proposed in the Scoping Plan. This is a second chance for the community to influence the contents of the Scoping Plan.

Take action with CEJA and our members by signing up here.