We are at a pivotal moment in California climate policy. The Governor just signed into law two historic bills. SB 32 sets ambitious goals for reducing greenhouse gas emissions by 2030, and AB 197 enacts new reforms at California Air Resources Board (ARB), the leading regulatory agency in charge of implementation, and directs the agency to ensure there are emission reductions in environmental justice communities.

These new laws will result in major shifts across our state to meet the growing crisis of climate change. Now is the perfect moment to assess if our current system of cap and trade is addressing the needs of communities who are on the frontlines of climate change: low-income communities and communities of color most impacted by pollution. Unfortunately, a new report released today documents critical flaws in the system, proving many of the concerns the environmental justice community has long raised. 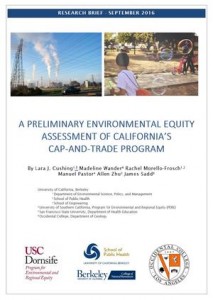 Researchers analyzed cap and trade compliance data from the Air Resources Board, looking at residential demographics of communities hosting regulated greenhouse gas (GHG) facilities, along with trends in GHG and particulate emissions.

What does the research show?

1. Greenhouse gas emissions from facilities that are located in EJ communities are not substantially dropping, even though overall GHG emissions have declined.

When it comes to greenhouse gas pollution, place matters. When we drill down to what is happening on the local level under cap and trade, we see either no decline or actual increases in GHG emissions. Environmental justice communities have long been concerned that cap and trade will not deliver “local emission reductions” in greenhouse gases (GHGs). These type of reductions, which occur on-site at facilities and simultaneously reduce toxic co-pollutants, are critical to communities on the frontlines of climate change.

Unfortunately, the analysis shows GHG increases in several sectors, including cement, hydrogen, and oil and gas production and suppliers. Most emission reductions have come from the out-of-state electricity sector, as California has reduced imports from sources with a greater carbon footprint, such as coal. But simultaneously, emissions from in-state electricity – power plants – have actually increased by 4.5%.

According to the report: “While overall, greenhouse gas emissions in California have continued to drop from a peak in 2001, we find that, on average, many industry sectors covered under cap-and-trade report increases in localized in-state GHG emissions since the program came into effect in 2013.” 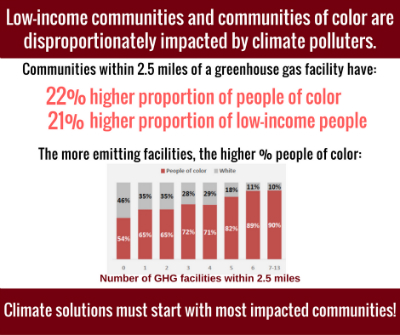 California’s cap and trade program is exacerbating a long standing air pollution problem, whereby some communities have clean air and some are stuck with dirty air and related health issues.

These large emitters don’t just release carbon dioxide; they release a range of pollutants, including PM10, which is known to negatively impact air quality and health. These carbon dioxide and PM10 emissions compound and potentially exacerbate already existing environmental impacts; large GHG emitters are more likely to be in neighborhoods that have already high pollution burdens, as shown by CalEnviroScreen 2.0.

3. Offsets give polluters a loophole to avoid localized emission reductions.

Offsets allow emitters to buy credits for projects run by another company. Theoretically, these projects reduce GHGs, and buyers get to include the saved GHGs as part of their legal requirement to reduce. Offsets are the cheapest way to meet required reductions under cap and trade.

During the time period analyzed, over four times the total offset credits were used than the total reduction in allowable GHG emissions. To meet the GHG reduction requirements, many of the largest emitters were just buying credits. And these weren’t in-state projects companies bought credits for; the majority of the offset credits (76%) were used outside California. This means we have been exporting our potential climate and air quality benefits to other states.

It is primarily large climate polluters that are benefiting from use of cheap offsets; 4 companies accounted for nearly half (44%) of all offsets used: Chevron, Calpine Energy Services, Tesoro, SoCal Edison. The top 10 users of offsets accounted for about 36% of the total emissions and 65% of the offsets used, and include other major climate polluters Shell, Valero, PG&E, San Diego Gas & Electric, NRG Power, and La Paloma Generating Station.

We need climate solutions that work for communities that have been or will be hit first and worst by climate change and related pollution. With the new, ambitious GHG reduction goals for 2030 now in place under SB 32, and AB 197 lifting up the need to prioritize emissions from stationary sources, we have a unique opportunity to put equity and environmental justice at the center of our roadmap to meeting these targets and achieving a Just Transition off fossil fuels.

Martha Dina Argüello, Executive Director of Physicians for Social Responsibility – Los Angeles shares reflections on our new report below. Read her full blog here.
“This report confirms all of our lived experiences with Cap and Trade. This program fails the communities that need real changes the most. Emissions in environmental justice communities are not changing, and when they are, it’s for the worse. The assessment also confirms that the areas most impacted by greenhouse gas emitters are low-income communities of color.
The current system is not working. We need to do better. We need climate solutions that build in equity, and the unique needs of impacted communities, from the start. This means regulations that prioritize public health, neighborhood resiliency, and a just transition to a clean economy. With the passage of SB 32 and AB 197, we have a second chance to be bold, to act on the findings of this report, and to fully explore alternatives to cap-and-trade.”
.

California cannot maintain its global climate leadership if we don’t address the environmental and climate needs of our most vulnerable residents. By prioritizing equity in climate policy development and implementation, we can better maximize public health benefits for all Californians and achieve win-win benefits of fighting climate change, improving local air quality and public health.

The path to achieving California’s remarkable climate goals and a Just Transition starts with those who have been most impacted. In 2017, equity and environmental justice must be at the center of climate policy.