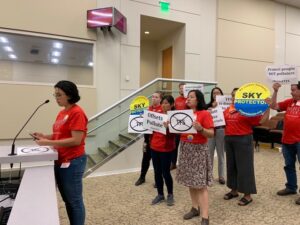 Yesterday, on the eve of the Global Climate Strikes, the California Air Resources Board (CARB) voted 7-4-1 to approve the controversial Tropical Forest Standard (TFS), paving the way for California’s polluters to continue paying to further pollute through a flawed market scheme that hurts public health, with no meaningful climate mitigation or protections for indigenous sovereignty.

Despite strong objections of environmental justice and indigenous groups from around the world, as well as overwhelming evidence that international offset programs have largely failed and result in human rights abuses, the deciding vote in favor of endorsing TFS was Hector De La Torre, the Assembly’s purported environmental justice representative on the CARB. CARB board member Dr. John Balmes abstained from the vote, citing public health concerns, while Senator Dean Florez, Supervisor John Gioia, Supervisor Nathan Fletcher, and Ms. Diane Takvorian all voted no, citing serious concerns with the integrity of the TFS and need to uphold the mandate of CARB to protect public health and focus on reducing emissions here in California.

“It is unacceptable that a CARB Board member who is supposed to represent environmental justice communities was so clearly hostile to their concerns and positions, and was the deciding factor in moving this flawed and dangerous measure forward. While we expect to have to advocate against false climate solutions pushed by groups who recklessly disregard the welfare of our communities, we are astounded to find ourselves also fighting against a person holding a position that statutory law intends to be our voice on the CARB. Hector De La Torre has not been an ally to the environmental justice community since his appointment, and he is not our representative.”

The TFS is a non-enforceable offset protocol promoted by Environmental Defense Fund, The Nature Conservancy, and Earth Innovation Institute – all environmental groups that financially gain from regulated industries and who frequently promote strategies that purport to help the environment while sacrificing the health and well-being of communities of color. These organizations often argue that what is good for most people is the responsible choice, even when those choices mean that those most vulnerable suffer severe consequences.

“It is a shame that – yet again – environmental justice communities are forced to defend themselves against a strategy promoted by corporate-funded environmental groups. These groups often promote strategies that sacrifice the health and well-being of communities of color in the interest of promoting dubious solutions for our climate crisis. In this case, these environmental groups promoted the TFS as a way to help companies “greenwash” their organizations without actually reducing emissions, and created serious divisions within indigenous communities to accomplish their goal.”

In his speech at the end of the hearing, Mr. De La Torre cited the fact that the vote was not about including any offset credits generated by the TFS in California’s Cap-and-Trade program, ignoring the fact that such a linkage is discussed on the first page of the TFS. It was also discovered that Mr. De La Torre used his role on CARB to lobby legislators for the proposed TFS, thus actively working against the position of the environmental justice communities he was appointed to represent.