Environmental Justice in the 2019 Legislative Session 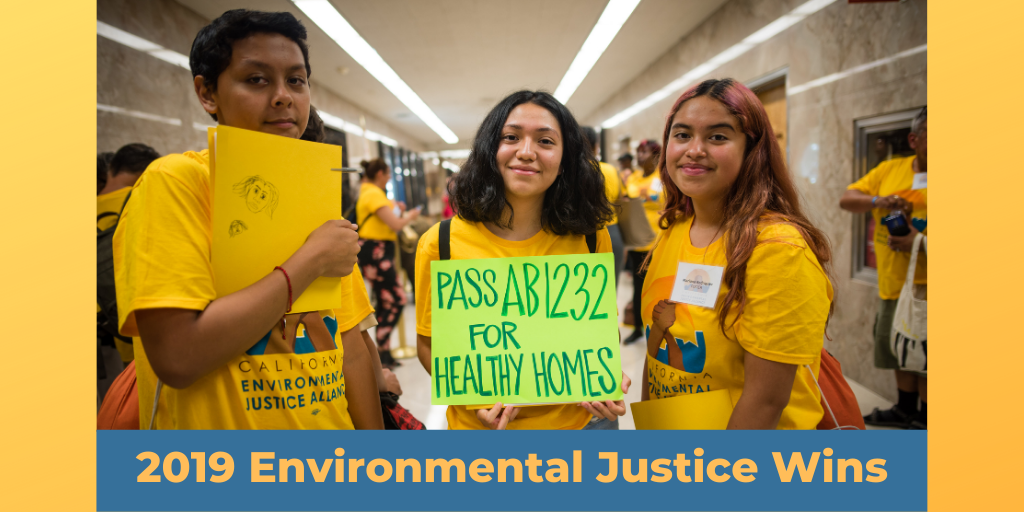 CEJA is proud of our 2019 environmental justice legislative achievements. The majority of our priority bills moved successfully through the legislative process and were signed into law by Governor Newsom. These new laws will provide a range of critically needed benefits to environmental justice communities, from bringing clean safe drinking water to communities, greater transparency and community engagement in decision-making and planning processes, better access to resources for disadvantaged unincorporated communities, cleaner trucks, and public banking opportunities.

CEJA members again demonstrated visionary leadership in moving these bills through the legislature, and were resolute in efforts to educate decision-makers and raise awareness of the underlying issues necessitating their passage. Community members and other advocates visited with their representatives, engaged in strategic communications, and other efforts that made enactment of these new policies possible.

We observed strong support for environmental justice issues from established allies in the Legislature. Long-time friend of environmental justice, Assemblymember Todd Gloria authored two CEJA priority bills this year, both of which were signed by the Governor. CEJA was also honored to work with Senator Bill Monning, Assemblymember Richard Bloom, and Assemblymember Eduardo Garcia on SB 200 to finally bring safe and affordable drinking water to communities that have for too long been deprived of this basic human right. Other allies, like Senator Hannah-Beth Jackson and Assemblymember Al Muratsuchi, also authored key pieces of legislation for CEJA.

CEJA is grateful for the opportunity to work with Assemblymember Robert Rivas – a freshman member from the Hollister area – on a priority bill to improve the definition of environmental justice. We were also excited to work with Assemblymember Brian Maienschein, a recent addition to the Democratic caucus, on priority legislation to protect outdoor workers from dangerous air quality during wildfire events. CEJA will continue to identify and cultivate relationships with new legislators and their staff so we can build and support new legislative champions to exercise bold leadership for environmental justice communities.

While we made significant gains this year, there are critical issues that remain unresolved, specifically regarding Department of Toxic Substances Control reform and policy changes to establish setbacks for oil and gas operations from sensitive sites. CEJA and our members remain committed to working with the Administration and the Legislature to advance policy changes that will promote environmental justice in low-income communities and communities of color in California.

Governor Newsom started the year strong by committing to finding a solution to the lack of safe and affordable drinking water in California shortly after being sworn in. CEJA partner Leadership Counsel for Justice and Accountability laid the groundwork for this policy change through years of leading advocacy and organizing, including having policy language in-hand. A diverse coalition of stakeholders, together with strong legislative will took Leadership Council’s efforts and the Governor’s commitment across the finish line with the passage of SB 200. For the first time, California has committed to the policy changes and funding necessary to achieve safe and affordable drinking water for everyone.

CEJA was proud to work with partner organization Central Coast Alliance United for a Sustainable Economy on AB 1124 (Maienschien), a bill that would have mandated that the Occupational Safety and Health Standards Board adopt an emergency regulation to protect workers from smoke during wildfire events. This bill was a direct response to community observations that farmworkers were still laboring outdoors on agricultural fields while exposed to unhealthy, hazardous air from wildfires. Due to community outcry, a strong coalition of partners, including labor, and legislative support, OSHA moved forward on an emergency regulation in July and started a permanent rulemaking process in August, making AB 1124 unnecessary for the moment. CEJA is proud to have been a part of the diverse coalition of advocates, led by Worksafe, that proactively elevated the rights of farmworkers and other outdoor workers to safe and healthy work conditions.

Our member Environmental Health Coalition has advocated for decades to improve the air quality and environmental health of communities impacted by some of the worst air pollution in the state. One of the obstacles has been the current governing board of the San Diego Air Pollution Control District, which is comprised only of the five members of the County Board of Supervisors. AB 423 changes that by bringing greater representation and creating a path for accountability and transparency. It will also be the first in California to include an environmental justice representative!

Our member organization Asian Pacific Environmental Network led the creation and passage of the Healthy Homes Act, which creates and expands anti-displacement protections for state energy efficiency programs serving low-income customers. As our state increases energy efficiency and electrification investments, low-income tenants are placed at risk of rent hikes and displacement by landlords who seek to benefit from these upgrades. AB 1232 guides agencies in data collection to ensure enforceability and to better penetrate the unregulated affordable housing market. The bill would also increase coordination and collaboration between the Low Income Weatherization Program and public health programs addressing health issues in homes of vulnerable residents.

Everyone has the right to live in a clean and healthy environment, which includes respecting every person’s right to self-determination. The best people equipped to transform toxic hotspots into healthy neighborhoods are the people who live there. Our frontline communities have long endured disproportionate pollution burdens across California, while state and local agencies continue to deny them a voice in the key environmental and land use decisions that impact their health. AB 1628 enhances the state’s definition of environmental justice to include the “meaningful involvement” of all people in environmental or land use decisions. Adding “meaningful involvement” would encourage state and local agencies to recognize that the community shouldn’t just be informed or talked at; rather, that community members should be engaged and involved in these important decisions. It means recognizing the long overdue need to address disproportionate pollution burdens with community voices and solutions.

The climate crisis impacts environmental justice communities first and worst. During the last wave of wildfires, many immigrant, monolingual, and low-income communities were left without access to emergency information or assistance, both during and after the fires, causing further distress and many community members to suffer economic loss. SB 160 will now require counties to engage communities when updating emergency plans to ensure that local disaster preparedness and response activities (alerts, communications, evacuations, and sheltering) are culturally competent and meet diverse needs. This bill prioritizes reaching culturally diverse communities including immigrant and refugees and low-income communities of color among other groups. We are proud of our members and CEJA’s Womens’ Policy Institute cohort who led this bill through passage!

At the end of session CEJA and our members mobilized to stop AB 1299 (Salas), a late session bill that would have removed some monitoring requirements for small refineries in rural areas. This bill was authored by Assemblymember Rudy Salas (D-Bakersfield) and co-authored by Senator Melissa Hurtado (D-Fresno) and Senator Shannon Grove (R-Bakersfield) at the request of Kern Oil, a refinery located southeast of Bakersfield near Lamont. Working with the Center on Race, Poverty & the Environment and other local allies, CEJA was able to bring up residents who live near that refinery to speak to the authors of the bill about the negative impacts on their community and their desire for a just transition. The bill was stopped before it got to a Senate floor vote.

CEJA and our members, with the leadership of CRPE, have for years led and engaged in discussions with decision-makers regarding much-needed reforms for the Department of Toxic Substances Control. Meaningful reform includes that which incorporates the findings of the Independent Review Panel, as well as expressed needs and concerns of impacted communities. This legislative session saw several bills introduced (AB 1357 – Quirk, AB 995 – C. Garcia, and SB 633 – Stern), but unfortunately none of them moved forward to the Governor’s desk. CEJA is hopeful that comprehensive, meaningful, and equitable DTSC reform will move in 2020, and looks forward to engaging with the Administration and the Legislature on designing those solutions.

One of the most critical environmental justice issues facing frontline communities throughout the state is the slew of health and safety impacts caused by oil drilling and other fossil fuel operations in dangerously close proximity to homes and schools. CEJA members in Kern County and Los Angeles have been sounding the alarm for years as they’ve watched oil wells pop up near homes and schools as families and children have experienced acute and chronic illness impact their daily life activities. A bill led by the Center on Race, Poverty & the Environment to establish health and safety setbacks of 2,500 feet for oil and gas wells, AB 345 (Muratsuchi), became a two year bill in 2019. Setbacks would provide meaningful public health improvements for nearby communities by creating a buffer between residents and the emissions, including carcinogens, criteria and toxic air pollutants, and other safety threats. Unfortunately, AB 345 was made a two year bill in the Assembly Appropriations Committee, but CEJA and our members look forward to continuing to push for meaningful setback policies in California in 2020 and beyond.