Reflections from COP 21: No REDD in California 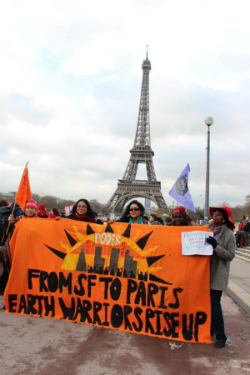 CEJA is proud of our members from Asian Pacific Environmental Network, Communities for a Better Environment, and People Organized to Demand Environmental and Economic Rights that attended the United Nations climate negotiations in Paris. As part of the Climate Justice Alliance’s It Takes Roots delegation, they stood in solidarity with other frontline and indigenous leaders to demand strong international agreements that protect and benefit the people most vulnerable to the impacts of climate change.

Together they spoke truth to power as they confronted global leaders, helped redefine climate leadership, and ensure that community voices were heard at the highest levels of decision making to keep false solutions off the table. These were their demands:

With other grassroots groups, they called on leaders from the United States to fulfill their commitments to pay our climate debt to frontline communities globally, and to support and move resources to community-led priorities and local infrastructure needs to build sustainable economies and energy democracy. Despite the protest ban, the whole world watched them take action in the streets, fighting creatively and courageously to hold their leaders accountable to the greenhouse gas emissions goals that we must meet to keep our planet livable.

In the end, global leaders set their goals too low in an agreement that still lacks accountability mechanisms and doesn’t do enough to support those who are least responsible but most impacted by climate change. Now it’s up to us to strengthen these promises and keep demanding a deeper commitment to climate justice that will put us on the path to transition off of fossil fuels and towards 100% equitable renewable energy.

No Expansion of Cap and Trade in Our State! 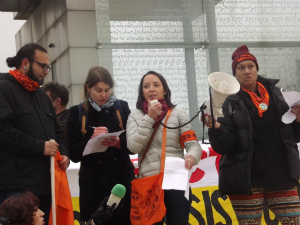 In Paris, California was touted as a climate leader, praised by Pope Francis and President Obama, and it is clear that climate policy in our state sets global standards. Our members got to hear firsthand from indigenous leaders who are directly impacted by such international forest offset programs like Reducing Emissions from Deforestation and forest Degradation (REDD) which was a major point of contention at the COP 21.

This program would allow polluters whose greenhouse gas emissions are regulated in California to avoid directly reducing their emissions and instead invest in programs in other countries that supposedly conserve forests. Unfortunately, with little accountability, these programs often lead to land grabs of indigenous land, planting of monocultures like oil palm plantations and loss of biodiversity, and human rights abuses around the globe. And the program is a fundamentally false solution that doesn’t get to the root of problem: corporations need to stop using dirty fossil fuels and reduce their emissions, not pay for the ability to continue to pollute.

Unfortunately, the California Air Resources Board is considering allowing REDD programs into the state’s already-flawed cap and trade program. CEJA is working hard to stop this!

California’s cap and trade system does not reduce pollution for communities who live near polluting facilities. The communities where CEJA’s members live and work need immediate air quality improvements and greenhouse gas reductions. California’s cap and trade program already give polluters the ability to buy their way out of reducing emissions, they certainly don’t need yet another way to avoid their responsibility! 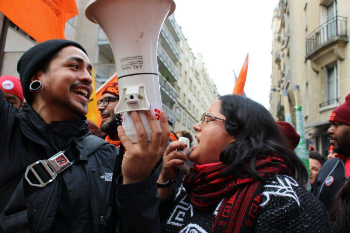 To keep our state a global climate leader, we need to let our decision makers know that California’s proposed REDD plan will not reduce our state’s climate emissions or protect forests. International forest offsets unnecessarily expands policies that prevent our state from focusing on implementing solutions that benefit the most impacted communities in our state. We need to tell the California Air Resources Board to listen to impacted communities and focus on reducing emissions here at home.

Filed under: Featured 2, News by kay-ceja